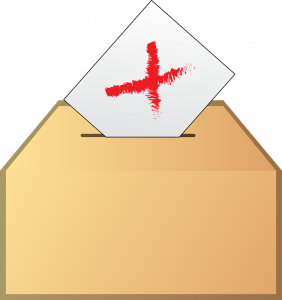 This one was news to me. The Wall Street Journal had it buried in a ‘spread sheet’ section of their online Real Estate section: “Why It’s Harder to Sell Your Home in an Election Year.” If you are like me—never having had an inkling that Highlands homes for sale have rough sledding in an election year (like this one)—you’d have to read the details.

“The uncertainty of a looming election can cause a dip in home sales,” it detailed, “especially if the race is close.” The article was illustrated by a cartoon showing a neighborhood street whose every lawn was graced by alternate “vote!” signs and homes for sale signs. The underlying thesis was that in close elections, house hunters are reluctant to buy if an uncertain political future makes them unsure about their own financial fortunes.

This might sound reasonable from a logic perspective, but as you read further into the factual basis for the idea, you’re likely to start losing confidence.

The whole basis for the article is a political science paper published in 2014.

In the British Journal of Political Science.

Most of us would begin to worry about why this couldn’t make the grade in a United States journal of political science, since it centered on U.S. elections. Perhaps a research quality issue? Then there’s the fact that those dates are 10-17 years old. There is also the puzzling notion that there have been 73 elections in the past couple of decades…but it turns out that they are dealing with gubernatorial elections from a select number of states. Perhaps our average house hunter checking out homes for sale in Highlands actually does hang their financial fortunes on who the next Governor is going to be…but I wouldn’t bet on it.

As for Presidential elections, the article mentions a separate analysis that “uncovered a similar effect.” But, on closer reading, not really. This analysis was by someone who studied California sales only, and determined that in the Golden State, home prices rose by an average of about 1% less during election years. But they still rose by 4.5% in those years. If that means they were “harder to sell,” you’d have to explain why…

This is only a guess, but if you were trying to determine if it will be easier or harder to find buyers for Highlands homes for sale in Election Year 2016, it seems more logical to look for factors that directly affect the buyers—such as today’s historically low mortgage interest rates. When buyers do the arithmetic showing how low monthly payments have become, I’m willing to bet that overshadows errant thoughts about who the next Governor is going to be.

If you are readying to buy or sell a Highlands home, you probably don’t really need to worry about who will occupy the Statehouse as much as who will be helping you navigate the market. I hope you’ll elect me for the job!