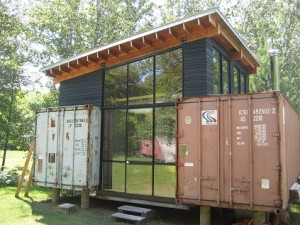 Sapphire residents been hearing about unbelievably tight housing situations in some U.S. cities for many years, but last week there was one report that would have challenged any imagination. This was about a Wharton School graduate who is spawning a new way to afford rents in the San Francisco Bay area. His solution: live in a shipping container.

The article appeared (with pictures) in BloombergBusiness. The photos weren’t exactly flattering of Luke Iseman’s 160-square-foot “box”—in fact, the bright blue painted walls seemed definitely in need of a decorator’s input (not to mention the cords and ducts strapped from ceiling to floor). With a shower constructed from discarded boat hulls and a camp stove set atop what appears to be a deconstructed wooden crate, the overall look might be described as post post post modern urban chic.

But Mr. Iseman is making progress turning his container housing option into a business. In fact, he is already presiding over 11 of the “miniature residences,” where his tenants live inside a warehouse he leases across the Bay from San Francisco.

In case Sapphire real estate watchers suspect this is a less-than-serious attempt to forge a new kind of rentable living arrangement, a quick review of housing costs in the City by the Bay will have them thinking twice. According to Bloomberg, the median rents in June jumped 16% from a year earlier (15% in the wider metro area). Median sales price is over $1.1 million in the City.

The chief market analyst for one S.F. real estate outfit put the housing situation in perspective. “People have to get creative,” he said. Bloomberg put its perspective another way: “The market…is crazy…”

Iseman’s “new model for urban development” does have some serious hurdles to clear before the “more sustainable, affordable and enjoyable” urban development model gets much further. One of the hurdles is that it’s illegal—he’s already been rousted from two other sites. But with Bay Area building inspectors busy dealing with converted garages, offices, living room conversions and other unlicensed structures (like rental tents), his startup concept may last a while longer.

What seems somewhat comical to Sapphire observers is actually a creative answer to a very real problem. Iseman had been paying $4,200 a month for a badly maintained two-bedroom apartment before he thought up the container idea. He bought his first container, which had been classified as industrial waste, for $2,300 (delivered), spent $12,000 converting it, and voila!—suddenly he had himself some affordable East Bay housing. In and around and area where 10 jobs are added for every new residence, who’s to say this stop-gap solution might not prove to have some staying power?

One thing is for certain—our Sapphire real estate scene is going to continue to offer a choice variety of affordable housing offerings, even without the benefit of shipping containers. Give me a call whenever you’d like to go over the wide range of opportunities today’s market is providing.