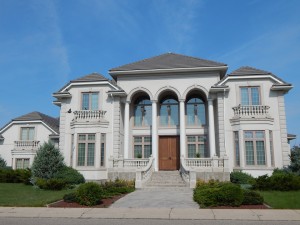 It looked like another chuckle-worthy April Fool’s Day dispatch: CNBC’s webcast “Is NYC luxury real estate about to go bust?” It was barely 7 in the morning on April 1—but only the most bleary-eyed Highlands web watchers were likely to have been caught off-guard.

Pranksters had already made mincemeat of the credibility Friday news dispatches normally deserve. Web parodists had started early (against all common decency, the day before). Late on Thursday, Gizmodo had announced the sale of the “Moon Watch”—its $27,500 price tag justified by a housing made from genuine moon rock brought back to earth by the Soviet’s 1974 Luna probe. Sure.

Even before the sun came up, Google Express made its first sky-enabled delivery. Not by drone: the first delivery was an axe, dropped by parachute.

Duolongo advertised a miraculous new product—a pillow that uses Morse code to teach you a language while you sleep (“I went to bed speaking only English, but woke up bilingual. Buenos dias a todos!”).

So CNBC’s projection of doomsday for Manhattan luxury real estate—for April-Fools-wary Highlands readers, at least—would not have been taken very seriously. The problem was, it actually was authentic. Sort of.

The webcast was a segment lifted from the CNBC Squawkbox show, presumably aired that morning. The blurb promised, “CNBC’s Robert Frank takes the wraps off a new report that shows the luxury real estate market in NYC is about to crumble.” And it did have a promising setup for what (to anyone living outside The City, possibly including a few Highlands residents) might take to be breathtakingly unsustainable price levels. Some of the new records posted:

But…so where is the promised luxury real estate “bust”? It didn’t seem readily at hand—especially after we were shown a 5-bedroom Central Park coop. It had been bought in 2003 for a pittance ($12 million). Now it had sold quickly. By regular Highlands standards, at least, that didn’t seem to evidence much luxury real estate crumbling, since the selling price had been $35 million. Frank explained that the owners had done “some renovating”—so we were momentarily left wondering if the crumbling was because they’d had to go to so much trouble…

No! The reason put forth was that many of the record sales resulted from contracts signed as much as 18 months earlier. So maybe it was possible that these high prices and sales volumes might not be sustainable. There was no evidence beyond nervousness about China and the stock market tumble (which had just reversed, oddly enough).

That the report on NYC luxury real estate was not an April Fool’s joke was a sort of April Fool’s joke in itself. Here in Highlands, those kinds of worries were less widespread. China seemed a bit remote—and the stock market had already come roaring back—but neither seemed to be key to Town’s luxury real estate. If you would like some authentically real-world market info, do give me a call!