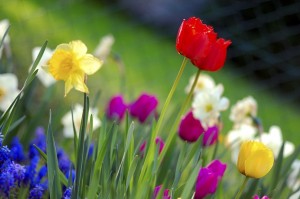 Okay—it’s understandable if that seems like a somewhat premature announcement, but it is verifiable from any number of sources. Never mind that this year, spring doesn’t officially arrive in Sapphire until March 20…but that’s only what astronomers say (and they can’t even decide whether Pluto is a planet). Meteorologists take issue with them, anyway. It’s always March 1 as far as meteorologists are concerned. But this year’s Godzilla El Niño has made everything they say subject to revision. And anyway, we’re talking about real estate—and when it comes to real estate, spring is here already!

Now, it may be true that if you look on one of those bank calendars you got in the mail last December, it’s likely to tell you that we’re weeks away from the change in seasons. And depending on what the latest weather seems to be doing, winter may seem to be hanging on for a while longer.

But nimble Sapphire real estate watchers know they can’t believe everything they read (or see happening outside in the garden). Cherry blossoms can’t call the shots when it comes to announcing Sapphire’s spring selling season, any more than tulips can. And that groundhog can stay in his den, for all the difference it makes to home sales.

This is fact: according to the real estate industry’s calendar, the spring selling season—in Sapphire and everywhere else across the nation—has definitely sprung!

Supporting evidence has flooded in from everywhere. For example:

⦁ Home Depot just announced it is hiring 80,000 workers for spring. These are the folks who work the cash registers [nowadays, shouldn’t they be called “plastic card registers?”] and help us wander up and down the aisles, looking for things we can’t describe exactly. Without them, spring wouldn’t be the same. With them, spring is clearly underway.
⦁ Internet real estate behemoth Zillow came out advising that everybody who is thinking about taking advantage of the spring selling season should start preparing their property “NOW”—and that was two weeks ago!
⦁ CNBC put it in real time: “Spring housing season kicks off with record short supply” was their headline. If CNBC says so, who could argue?
⦁ Baseball teams have hightailed it into camp. That should end the discussion…

These harbingers of the spring selling season should certainly mean more than robins hopping across lawns or yellow and pink Peeps appearing on grocery store shelves. And even for any overly cautious souls who decide to wait for the bank calendars’ say-so, taking full advantage of the spring selling season in Sapphire necessarily calls for advance preparation. A strong way to start is by giving me a call!