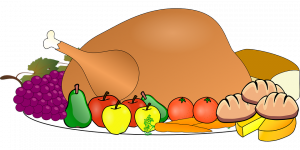 It turns out that there is a connection between Highlands’s Thanksgiving celebration and a notorious lamb—but it’s historical rather than culinary.

The early history includes tale of one uncanny happening that befell the Pilgrims when they went ashore in in the spring of 1621. They had reached the New World the previous November because of a delayed departure, and the early onset of a harsher winter than expected had given them no chance to establish their settlement. They spent that long, miserable winter in the cramped confines of the tiny Mayflower. Illness and near-starvation followed…

By the time spring arrived, nearly half of the settlers and crew had perished. It was shortly afterward that a native stepped out of the forest and the uncanny happening ensued. Rather than fleeing, he raised his hand and greeted them.

He may not have said, “What up, bro?”—but it’s certain that this must have been low on the list of anything the astonished Pilgrims could have expected. Later, the famous native Squanto showed up to explain in detail. He had been kidnapped by slavers years before, taken to Europe, escaped, and eventually returned, where he had shared his adventures (and the odd language of London).

It turned out to be the beginning of a beautiful relationship. Squanto instructed the settlers in how to grow corn (which probably saved their lives). At any rate, to the pious Pilgrims, it’s small wonder that by the time of the first Thanksgiving celebration, what had at first seemed “a hideous and desolate wilderness” had been transformed into bounteous proof of “the loving God” they had traveled so far to worship in peace.

Today’s Highlands family Thanksgiving celebration may now include football (and we now substitute turkey for the eagle and swan that prevailed back then), but the core of Thanksgiving—gratitude—remains. The connection with the lamb happened centuries later.

A young girl named Mary Sawyer had a pet lamb, and one day her brother urged her to take it to her one-room schoolhouse. A visiting college student was an onlooker, and wrote a few lines of a rhyme memorializing the giggling uproar that resulted. The poem survived, and was appended with another stanza by the poet and editor Sarah Josepha Hale. The schoolhouse was purchased by Henry Ford, who moved it to its current location in Sudbury, Massachusetts. The poem was immortalized by Thomas Edison, who recited it as the first demonstration of his new invention, the phonograph. Of course, it’s ‘Mary had a Little Lamb.’

The connection with Highlands’s Thanksgiving is due to Ms. Hale, because it was she who was responsible for the campaign that turned a pious local New England tradition into the national holiday we in Highlands celebrate every year. She’d had to petition four Presidents before Lincoln finally gave in. Also an accomplished educator (she helped found Vassar College), still remembered for her optimism and faith, added an explanatory final stanza to the poem:

“Why does the lamb love Mary so?”
The eager children cry.
“Why Mary loves the lamb, you know.”
The teacher did reply.

You can be sure the Pilgrims would have understood!