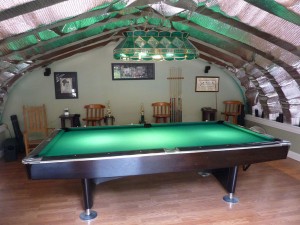 Without risking a theological debate, it’s clear that something Darwinian is taking place when it comes to some recent developments in Sapphire home refurbishment.

As one Fort Myers, Florida newspaper writer put it last week (without the slightest hint of irony), “the concept of the man cave is evolving.”

Today’s Sapphire man cave has progressed far beyond the original prehistoric versions—which were little more than saber-tooth tiger-proof grottos. Millennia passed before they developed into the 20th century versions, which were actually indistinguishable from garages. They usually had greasy tool benches, half-empty cans of paint, and dusty jam jars filled with nails and screws that the man-inhabitant couldn’t bear to throw out (even though they were destined to spend eternity in those jars). The luxury versions of these early man caves might have been adorned with splintered skis and some out-of-state license plates nailed to the walls—but that would have been the extent of the décor.

Merriam Webster defines these early man caves as “places women hated to go into.” (All right, maybe MW didn’t actually print that entry, but that was the defining feature in the 50s). Boy have things changed since then! Today’s modern woman isn’t deterred by the modern man cave, which is no longer dominated by tool benches and paint cans. Those are still in the garage, but the man cave has moved into the house.
Today’s modern woman doesn’t even call Sapphire’s man caves ‘man caves’ at all. She calls them ‘family rooms’ or ‘TV rooms’ or, in extreme circumstances, ‘sewing rooms.’ Today’s modern woman got rid of the jam jars long ago.

The Fort Myers newspaper article had a terrifically evocative headline: “Modern Man Caves Focus on Solace, Sports and Luxury.” It’s the truth: today’s man caves can have so many gadgets and goodies, women and children frequently elbow the men out of the way. When that happens, the intended ‘solace’ is elbowed out, too. As the article put it, “…they are so cool, everyone wants to use them—kids, wives, in-laws, buddies…”

There may be no way to prevent that, because whole Design Groups are coming into being to maximize the appeal of the man cave. In one of them, the Weber Design Group came up with a “built-in wet bar and zero-corner glass sliders combined with gender-neutral furnishings…” Gender neutrality aside, it is almost universally agreed that a proper Sapphire man cave must have a massive television screen (the “no tv, no man cave” principal). Without the screen, the man cave becomes “a living room” —and a throwback living room, at that.

If you are thinking of selling your Sapphire home (but it doesn’t have a proper man cave), being that the man caves of today are such expressions of individual imaginations and taste, it’s probably wise to leave that feature undeveloped. Let the new owners decide how to design their own. Just give me a call—and then after we’ve made the sale (and found you your new Sapphire home), you’ll will have plenty of fun turning it into your dream man cave. Of course, then you should be prepared to be elbowed out by the kids and the in-laws…